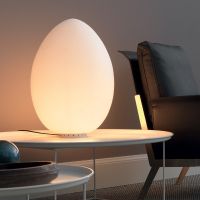 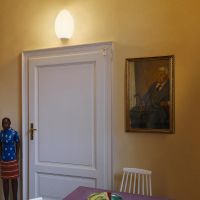 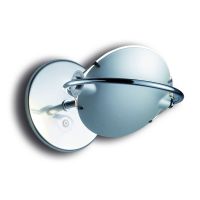 In Milan of the year 1881, the company Luigi Fontana was founded as a manufacturer of glass sheets for construction materials. Late 19th century also selected furnishings were made of high quality glass. By 1931 and the setting of Gio Ponti as artistic director a paradigm shift took place. He is one of the founding members of the Italian Association for Product Design and was an influential character in these years. In 1932 he founded with Pietro Chiesa the company Fontana Arte. Even today, over 80 years after its formative period, are some of Pontis designs still in production. Pietro Chiesa also is an icon of Italian design culture and designed in his career over a thousand different items, some of which influenced generations of industrial and product designers.

When Max Ingrand took over the artistic direction of glass painter and designer, Fontana Arte has undergone more profound changes. Thanks to the economic boom of the postwar period had to be operated by an industrial production, which dominated the high demand for Fontana Arte designs. Here Ingrand never lost the attention of a craftsman, who distinguished him.

Fontana Arte has always been known to work with the great talents of their time. Thanks to strong talent-scouting and the high standards of its designers, the Italian manufacturer, despite its long tradition still one of the most innovative companies in the Italian designer lamps industry. Just in time for 80th anniversary of Fontana Arte in 2012, the company obligated Giorgio Biscaro as their new artistic director. Biscaro, who was born in 1978, studied industrial design at the University of Venice with the diploma topic LED lighting. These modern lamps allow a new, energy-efficient method of lighting. Thanks to the high life durance, they are not very maintenance intensive and both suitable for commercial as well as private sector.

With the highly flexible the desk lamp “Three Sixty” succeed the Italians, the professional field in the office as well as consistently cover the private home office. Through two patented joints it is able to allow rotations of up to 300 °, which lets you control the direct light luminaire precisely. It is functional and minimalist. An equally formal character also possesses the Nobi wall sconce that presents you with a tremendous attention to detail and quality workmanship. Thanks to the rotatable reflector is a flexible application guarantees: from the uplight to targeted accenting.

A more unusual approach keeps the WIG pendant light. Numerous curved metal plates appear on the screen flow down and develop an exciting interplay of light and shadow. The most primitive form has the Ouvo table lamp. In the form of an egg, it quotes the beginning of the being. Made of glass it recalls the beginnings of the company. The design dates back to 1972 and is as relevant today as it was then.

LightingDeluxe.de offers in the Light Journal numerous suggestions for your home and the latest collections popular Italian and international designers.