Filter
No results were found for the filter!
- 15% 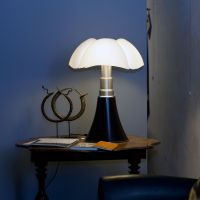 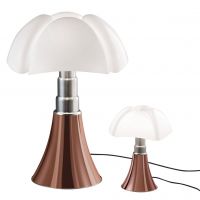 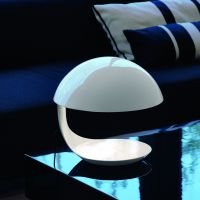 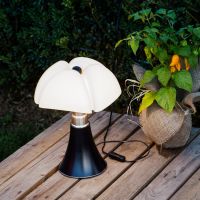 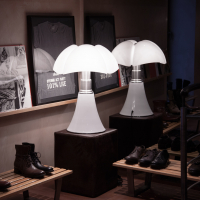 Rarely a manufacturer is clearly linked to a design like Martinelli Luce. Historically, just the "Bauhaus lamp" Wagenfeld by Tecnolumen is a similar style icon like the Pipistrello table lamp by the Italian manufacturer. In 2015 they celebrated 50th birthday and it is regularly updated with new colors or special limited editions. The light owes its existence to a fortunate coincidence: Olivetti, a manufacturer for typewriters, planned a special design concept for its showroom in Paris. Olivetti became aware of a design by the Italian architect Gae Aulenti and convinced Martinelli Luce to realize the design. Thanks to this success, the collaboration with Gae Aulenti intensified - on the part of Olivetti as well as on the part of Martinelli Luce.

The design of the Pipistrello is inspired by the bat wings and thereby acquires an unmistakable design, which refused the reduced, appropriate forms of modernity. Its playful design is more associated with the Art Nouveau and the Vienna Secession and therefore applies as a lesson of the Italian Neoliberty. This almost historicizing approach makes the design so extraordinary for that time and yet to a timeless classic even today.

However, the renunciation of rationalism does not mean a renunciation from the functionality. On the contrary: The Pipistrello is equipped with a telescopic neck, allowing her a flexible use. Martinelli Luce keeps the actuality of the luminaire with several revisions as the Pipistrello LED that appears particularly energy-efficient and durable thanks to modern technology, or the Minipipistrello table lamp, a smaller, filigree variant that fits perfectly on the nightstand.

The manufacturer itself was founded in 1950 by Elio Martinelli. Many self-developed designs were leading for the success in the early years. Functionality and innovation were always in the foreground. As sources of inspiration nature and geometry served. Even today, the company is located in Lucca, Italy. There, the company also maintains an exclusive exhibition space which - thanks to the historic influence of many designs - sometimes remembers in a museum.

Over the years, the reputation of the company Martinelli Luce consolidated as a leading brand for designer lamps. For this also helped the recordable product maintenance and the numerous new developments.

There were developed some classic originated - like the Cobra table lamp. The design of Elio Guidici dates back to 1968 and is still modern. Functional and futuristic - as this the extraordinary lamp would be probably best described. The spherical lampshade is due to free moving parts modifiable. The glossy, white surface of the lamp gives it a certain something and makes it a real classic of modern product design.

LichtingDeluxe.com offers next to Martinelli Luce other Italian manufacturers such as Artemide, Flos or Modoluce.